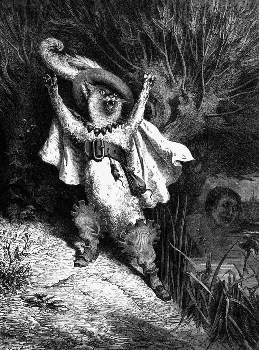 Help! Help! The Marquis of Carabas is drowning!
Advertisement:

"The Master Cat, or The Cat in Boots" ("Le Maistre Chat, ou Le Chat Botté"), more commonly known as "Puss in Boots", is a French Fairy Tale by Charles Perrault about a cat who uses trickery to bring his master from the lowest rung of society to the highest (full text here

. The title character has become such an iconic figure that he was the former Trope Namer for the trope Chessmaster Sidekick.

The tale opens with the third and youngest son of a miller receiving his inheritance — which consists of a single cat. The feline is no ordinary cat, however, and offers to make the kid rich if the kid buys him some boots. Puss then pays several visits to the local king, claiming to be a member of the household of the Marquis of Carabas, each time bringing a gift which he caught himself.

One day, knowing the king and his daughter are traveling by coach along the riverside, the cat persuades his master to remove his clothes and enter the river. The cat disposes of his master's clothing beneath a rock. As the royal coach nears, the cat begins calling for help in great distress, and, when the king stops to investigate, the cat tells him that his master, the Marquis, has been bathing in the river and robbed of his clothing. The king has the young man brought from the river, dressed in a splendid suit of clothes, and seated in the coach with his daughter, who falls in love with him at once.

The cat hurries ahead of the coach, ordering the country folk along the road to tell the king that the land belongs to the "Marquis of Carabas", saying that if they do not he will cut them into mincemeat. (A somewhat more plausible and palatable variant occurs in some versions: he claims that vicious gangs of bandits are plundering the countryside, and that his master has a powerful army these bandits would never dare to provoke, so the peasants should claim to anyone who asks that everything belongs to his master so that the bandits won't attack.) The cat then runs to a castle inhabited by an ogre (sometimes a wizard) with shape-shifting abilities. Puss flatters and taunts the ogre into proving his powers by transforming into a mouse... which Puss promptly dispatches and devours. The king arrives at the castle (which Puss claims belongs to his master) and, impressed with the bogus Marquis and his estate, gives the lad his daughter in marriage. Thereafter, the cat enjoys life as a great lord who runs after mice only for his own amusement.

The tale is followed immediately by two morals: "one stresses the importance of possessing industrie and savoir faire while the other extols the virtues of dress, countenance, and youth to win the heart of a princess."

Please note that Puss in Boots is not an adaptation of the fairy tale, but a Shrek spinoff that has virtually nothing in common with it except starring a Guile Hero cat.

Tropes in "Puss in Boots":