Literature / 'Twas the Night Before Christmas 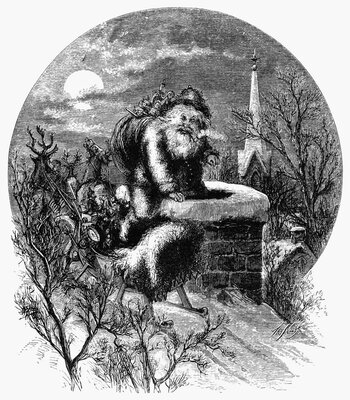 Illustration from an 1864 edition by Thomas Nast.
'Twas the night before Christmas,
When all thro' the house,
Not a creature was stirring,
Not even a mouse...
—The poem's opening lines
Advertisement:

A perennial favorite for Christmastime reading, the poem is considered the Trope Codifier for a lot of the popular imagery of Santa Claus, up to and including his reindeer and their names. As such an iconic work, it has also been parodied and spoofed enough to merit its own trope: The Parody Before Christmas. A related spoof is for someone to mix up the names of the eight reindeer in particular; that's Dasher, Dancer, Prancer and Nixon.

as read by none other than the trumpet master Louis Armstrong, himself.

The poem contains the following tropes:

But I heard him exclaim,
Ere he drove out of sight—
"Happy Christmas to all,
And to all a good night!"