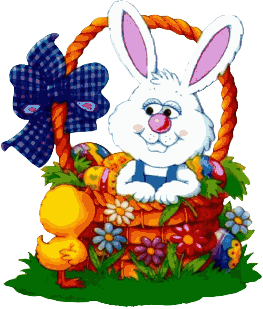 A legendary figure about the holiday Easter. In popular culture, it's a rabbit that hides Easter eggs (as in eggs dyed for Easter, not the video game Easter Egg), and children have to find them.

Its origins are a bit more complex. It's popularly believed that missionaries found that adding Christian elements to pagan celebrations made conversions a bit easier. So they combined the Christian celebration of Jesus's resurrection with fertility rites around that time of year, and rabbits and eggs being signs of those, they became symbols of Easter as well. It helped that the resurrection theme went along well with the renewal theme that it seems likely most pre-Christian spring festivals had. Unfortunately, there is no contemporary record of these festivals beyond a single reference to the goddess Eostre by the Venerable Bede.

In many places where Easter is celebrated today, things about sex and coming back from the dead aren't considered appropriate things to teach children, so the elements got fiddled around with until Easter became a case of Santa Clausmas for many people, with the Easter Bunny being the most prominent figure instead of Jesus.

Compare Santa Claus and the Tooth Fairy. In some more adult-oriented works, the Easter Bunny may be a woman wearing a Playboy Bunny outfit. Likely to appear in an Easter Episode.