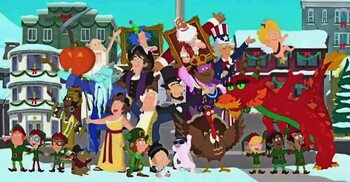 "365 days to year, but certain special days, that someone's gonna cheer. Some by minority, some by a mob. A good thing either way, otherwise us holidays would be out of a job."
Advertisement:

A Sub-Trope of Anthropomorphic Personification, holiday personification is when a being embodies or represents a certain holiday. Holiday embodiments frequently include but are not limited to the following characters, setting up a certain kind of pattern:

Note that this lineup is the most prevalent one in American media. Works from different countries are likelier to leave out US-specific holidays (like Groundhog Day and the Fourth of July) but to include personifications of local holidays not observed within the United States.

The power level of holiday entities often varies, although it's common for the ones embodying more popular or culturally impactful holidays to be more powerful; thus, the personifications of Halloween or Christmas are usually the most powerful, while "lesser" holidays like Groundhog Day are much less so. Holidays themselves are human social constructs, so human belief and awareness may also play into how powerful or weak a specific holiday icon is (as well as how popular or unpopular said icon is). In some cases, this may be explicitly extended to changes in a holiday's popularity actively affecting the status of its personification — a personification may experience a loss of power if their holiday fades from prominence, and may risk vanishing or perishing altogether if it ceases to be observed. Contrariwise, if a new holiday is developed a new figure may come into being once it begins to be celebrated.

Another common attribute of holiday representatives is being co-workers (or an equivalent thereof) or even friends with Mother Nature, Father Time, The Sandman, the Tooth Fairy, Jack Frost, The Grim Reaper, and the Boogeyman.

How Murray Saved Christmas (2014): The Christmas special begins with the introduction of Stinky Cigars. A town in the North Pole where all the holidays of the world, major and minor, reside and how they usually start their day.

How Murray Saved Christmas (2014): The Christmas special begins with the introduction of Stinky Cigars. A town in the North Pole where all the holidays of the world, major and minor, reside and how they usually start their day.