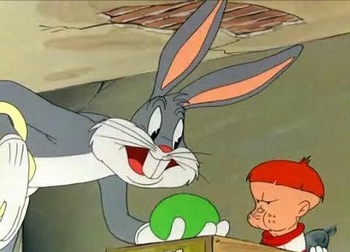 Bugs Bunny is out and about in the forest living his Bugs Bunny life when he runs into the Easter Bunny (or as he's called here, "Easter Rabbit"). The Easter Bunny sobs that he has sore feet and can't deliver his easter eggs, so Bugs volunteers. After Bugs leaves, the Easter Bunny reveals to the audience that he always gets "some dumb bunny" to do his work for him.

Bugs goes to deliver eggs to a house. Unfortunately for Bugs said house is occupied by a terrifying child who screams "I wanna Easter Egg!" and proceeds to beat the hell out of Bugs. The terrifying child's terrifying family shows up and Bugs flees a hail of gunfire. He's now much less willing to deliver eggs but the Easter Bunny coaxes him into giving it a second shot. Bugs then arrives at a much more welcoming house — which turns out to be a trap laid by Elmer Fudd.