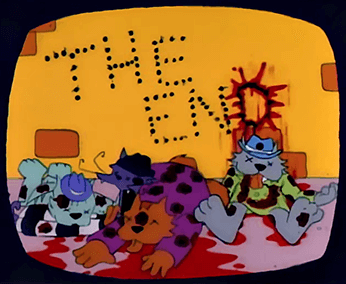 The literal Chicago typewriter.
And then they like shoot "Suggins" into the side of the wall. It's like, what, were bullets free back then?"
— John Mulaney, New in Town Special

Getting a message to someone can be done in all different sorts of mediums — paper and ink, electronic data, even your own blood if you have nothing else. But sometimes a person decides to write something into a surface in bullet holes. The reason can vary, from a comedic indication of a rough personality to a blunt threat that the person wants to make deadly clear to their target, but the result is the same: a sentence, a word, a Calling Card or even a letter formed of bullets. One would need Improbable Aiming Skills to make the writing legible.

Compare Sweetie Graffiti, which is a more peaceful form of carving a message into something.

Not to be confused with Calling Card or Zorro Mark, these tropes differ based on who leaves the messages, using what implements, where the message is left, and why:

open/close all folders
Comedy
Films — Live-Action
Literature
Live-Action TV
Video Games
Web Animation
Web Videos
Western Animation
Statler: You know, I actually paid somebody to shoot the word "Stupid" on something once.
Waldorf: Where did you have them spell it?
Statler: The Muppet's theater stage.
Both: Do-ho-ho-ho-hoh!