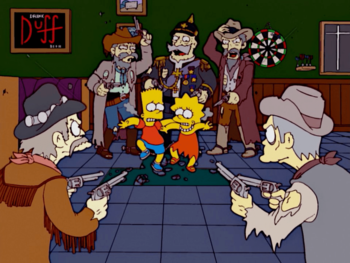 "Let's see you dance!"
— Just about everyone who has used this trope, ever
Advertisement:

A character with a gun fires quickly and repeatedly at the ground near another character's feet. The victim makes a series of awkward, near-reflexive jumps to save himself from being shot. Though his pride takes a sore beating, the victim's tender tootsies almost always survive unscathed.

Given the number of parodies and subversions listed below, this is obviously a Dead Horse Trope nowadays. Due to being a prominent trope in The Wild West, it most often involves revolvers, therefore they are often required to have Bottomless Magazines to shoot more than six times (Guns Akimbo can somewhat circumvent the problem but not for long, Throw-Away Guns is a rare occurence in such situation).

This should be obvious but Do Not Try This at Home. Pointing a deadly weapon, much less firing it, at someone should be reserved for life threatening situations. Firing a weapon should only be to eliminate a deadly threat in which case you should be aiming at centre mass. Deliberately firing near someone to scare them will get you into very serious legal trouble in most jurisdictions, not to mention you could hit and kill them accidentally, or someone behind them, and if the surface you are firing at is something like concrete the bullet could ricochet extremely unpredictably - you might even hit yourself.

Compare Hurt Foot Hop. Not to be confused with ballet dancing or with belly dancing.