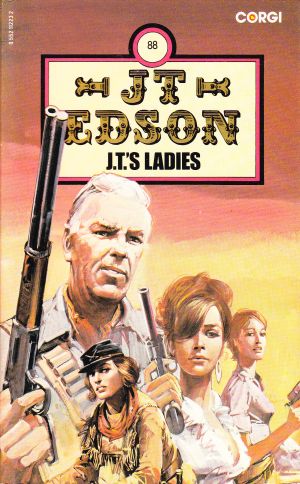 J.T. Edson and some of his heroines
Advertisement:

He was born near the border of the county of Derbyshire, England, in a small mining village, Whitwell, and was obsessed with Westerns from an early age. In his 20s and 30s, he spent 12 years in the British Army as a dog trainer. It was during this time that he began writing to alleviate boredom during long periods in barracks.

Upon leaving the army, J.T. won second prize (with Trail Boss) in the Western division of a literary competition run by Brown & Watson Ltd, which led to the publication of 46 novels with them, becoming a major earner for the company. He also wrote a series of short stories (Dan Hollick, Dog Handler) for the Victor boys papers, and wrote the "box captions" for comic strips, which he credited with instilling discipline and the ability to convey maximum information with minimum words.

His writing career forged ahead when he joined Corgi Books in the late 1960s, which gave J.T. exposure through a major publishing house, as well as the opportunity to branch out from the core Westerns into the Rockabye County police procedurals, the science-fiction hero Bunduki and other series.

His main series are:

Edson retired from writing in the 1990s due to failing health, and died in 2014.