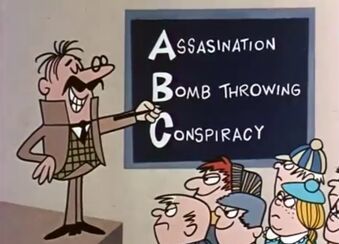 "And tomorrow, we'll be learning about 'DEF': Destruction, Extortion and French Accents."
"I didn't spend six years in evil medical school to be called 'mister', thank you very much."
— Dr. Evil, Austin Powers: The Spy Who Shagged Me
Advertisement:

This is a school that teaches their students how to be better villains. There will be courses on mayhem, extortion, use of powers for evil, money laundering and many other topics. Usually the school will be a strictly evil institution that is staffed entirely with Sadist Teachers and directed by the Principal / Big Bad. Despite this rigid order much of the rules have two big caveats: Might Makes Right, and the teachers won't punish cheating — rather, they'll punish getting caught because it's a sign of sloppy work.

Presumably, such a school is funded by graduates tithing back money to the principal, though he or she may get funding from parents who enroll their children because they want their kids to follow their evil jackboot-steps. Then again, the school may act as a talent agency / crime ring and hire out students as mercenaries, or use them to commit crimes.

To be fair, Dark Is Not Evil, and the Academy Of Evil may just be suffering from a bad reputation. In this case it will at worst be teaching the Off-Grey Arts and fomenting ambition and guile in the student body. Speaking of which, expect it to have a near Darwinian social scene that makes most prisons seem like a Sugar Bowl. The Alpha Bitch won't just badmouth you, she'll have her Girl Posse cut you up and sell you for parts to the Mad Scientist-in-training.

If there is a good-aligned Wizarding School, Ninja School, or Superhero School, expect them both to be rivals. May overlap with All-Ghouls School, although they're more likely to be Dark Is Not Evil. This will most likely be where villains get their Morally Ambiguous Doctorates. See also Thug Dojo for a martial arts school that trains its students to be amoral Might Makes Right type villains.