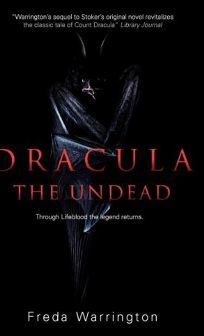 Through Lifeblood the legend returns — a sequel to the Legend of Dracula
Advertisement:

For the "authorized" Dracula sequel by Dacre Stoker, see Dracula the Un-Dead.

A sequel to Bram Stoker's gothic horror classic Dracula, written by Freda Warrington and published in 1997 — thus predating the "authorized sequel" by Dacre Stoker which, confusingly has the same title. Warrington's book sticks closer to the feel of Bram Stoker's original than the authorized sequel, retaining the format of telling the story through multiple diary entries and trying to Retcon as little of the original Canon as possible (unlike the authorized sequel which literally retcons the entire book, arguably making it not a sequel at all).

Seven years after the events of Dracula, the Five-Man Band from the original adventure — minus, of course, the now-deceased Quincey Morris — revisit Transylvania to reassure themselves that Count Dracula really is dead. Unfortunately, doing so wakes up Dracula’s dormant spirit, which he managed to anchor to this plane of existence through the connection he formed to Mina Harker. Dracula then takes the opportunity to exact revenge on the Harker family — Jonathan, Mina and their young son Quincy — whilst simultaneously trying to regain his body so he can go back to the whole blood-drinking-scourge-of-young-women-everywhere thing. Meanwhile, back in Transylvania, a Professor André Kovacs — friend and colleague of Abraham Van Hellsing — has heard Dracula's story and is in search of the legendary Scholomance — a school run by Satan himself from which Dracula supposedly learned all his tricks. Naturally, such reckless curiosity leads him to discover that not even Dracula can lay claim to being the biggest bad out there...

Dracula the Undead provides examples of: