Bad is Good and Good is Bad 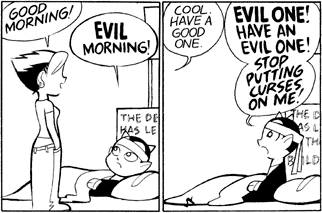 Certainly he means blessings. note ...Or, did he?
"Evil, be thou my good."
— Satan, Paradise Lost
Advertisement:

Sometimes it isn't enough for a villain to be evil. They have to prove their evilness by eschewing all that is good and embracing all that is bad. They'll eat foods that disgust the good guys and laugh at funerals. They may also carry this over to their speech, making sure to only use negative phrases when most people would use a positive one, and correcting themselves if they "slip" ("Oh, goody! I mean, 'baddy.'"). They'll kick puppies for sport, and describe things as repulsive like it's a good thing. They often describe sunny weather as depressing, and vomit at the very sight of rainbows. They may also be prone to do things purely For the Evulz, even petty things like throwing some kids' bikes on the roof. They may be plagued by a Minion with an F in Evil.

Makes Your Head A-Splode if you think about it too much.

It is a common trait of Card-Carrying Villains. It can also be why Evil Cannot Comprehend Good. If they simply loathe all positive attributes without necessarily emphasizing their negative ones, they're probably more of a believer in Virtue Is Weakness.

Quite likely to appear in a Perspective Flip if we see things from the villain's point of view.

They can also become a Complete Monster if this trope is taken too seriously in-universe.

See Nightmare Fetishist for the non-evil version. May be seen as an exaggerated Subtrope of Deliberate Values Dissonance.

Compare Above Good and Evil and What Is Evil? Villains whose strong point is not logic will sometimes use both tropes to justify this. See also Bizarro Universe, Mirror Universe, Blue-and-Orange Morality, and Naughty Is Good. Not to be confused with So Bad, It's Good.

Also, one of her first lines is "The world is really a very small and dark place. Just how I like it!"