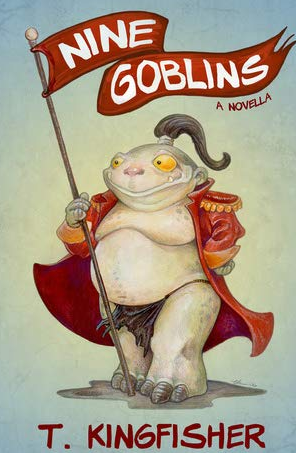 When she looked up, the elf was watching her. She was expecting to find an expression of contempt or hatred or something, but he met her eyes with unexpected camaraderie, like the only babysitter in a room full of children. How odd that our lives should bring us to this point, that look said.
Advertisement:

Nine Goblins is a story written by Ursula Vernon under the pseudonym T. Kingfisher and published in ebook format. It follows a troop of goblins fighting in the Goblin Wars and their encounter with the elf veterinarian Sings-To-Trees. It is also a sort-of prequel to the earlier (unfinished) story Elf vs. Orc

The goblin sergeant Nessilka and eight of her squad are magically displaced from the battlefront and dropped far behind the enemy lines when they attack a wizard during a battle. Their attempts to get home are cut short when they meet the elf Sings-To-Trees and discover strange things happening in the nearby human villages... like all the humans and animals suddenly vanishing, for example.