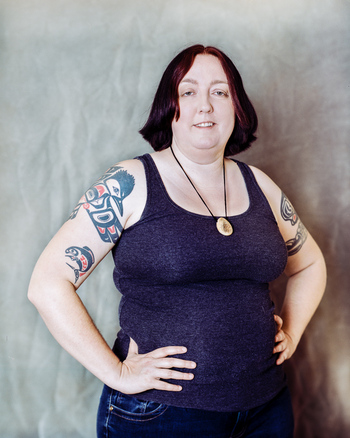 Ursula Vernon (born May 28, 1977) is a Hugo, Nebula and Lodestar award-winning American fantasy/sci-fi artist and writer. Creator of the Biting Pear of Salamanca

◊. She has a fairly considerable Internet following, and has created a number of webcomics, including the very notable Digger. Her artwork can be seen here

. She is also on Tumblr (personal

Following the success of her children's series Dragonbreath, her subsequent books for adults have been published under the pseudonym "T. Kingfisher

" to reduce the odds of them falling into the hands of her junior fanbase. She has also published a variety of short stories in online magazines such as Strange Horizons, Uncanny and Apex Magazine.

Neil Gaiman to get to free nachos, leaving him weeping on the floor, covered in guacamole.

Works by Ursula Vernon with their own trope pages include:

Other works by Ursula Vernon contain examples of: