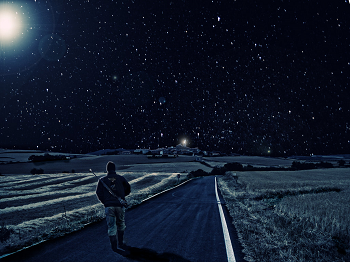 .
"Woo, hoo, here I come! Woo, hoo, back to you! There is no home like the one you've got, 'cause that home belongs to you!"
— Bolt, "Barking at the Moon"
Advertisement:

Basically, a story where the main goal is to get home.

These stories begin with some sort of displacement: The child is separated from his parents, the family moves and accidentally leaves the dog behind, or the hero winds up Trapped in Another World. This is the Call to Adventure. From there, the story essentially follows the long, winding journey of The Quest, except there's usually no evil wizard to fight at the end — once our heroes reach their destination, that's the end of The Hero's Journey. Tropes frequently seen in this type of story: The Wacky Wayside Tribe, the Travel Montage, Hitchhiker Heroes, Random Transportation (primarily in the case of science fiction or fantasy).

This differs from Home Sweet Home in that the focus here is on the journey to get back. Marty McFly wants to get back to his own time, but he stays in the same town the whole movie; Odysseus wants to get home, and he travels all over ancient Greece (and beyond) to get there. Structurally, the Homeward Journey is closer to The Quest than The Voyage and Return. It's common for works using this plot to be a Whole Plot Reference to The Odyssey. Another oft-stolen plot is the Anabasis, where a military unit is Trapped Behind Enemy Lines and has to fight and negotiate its way back home.

In an open-ended series, this inevitably leads to Failure Is the Only Option, because Status Quo Is God; films and series with a definite arc are more forgiving.

Compare Going to See the Elephant, I Just Want to Be Free and It's the Journey That Counts. Contrast Boring Return Journey, where a return trip is so uneventful so as not to be shown.