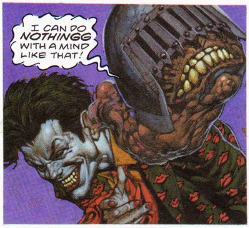 Guess I'll have to break the news
That I've got no mind to lose!
"Strong or weak, in the long run all of them break down. All, that is to say, of those who are initially sane. For, ironically enough, the only people who can hold up indefinitely under the stress of modern war are psychotics. Individual insanity is immune to the consequences of collective insanity."
— Aldous Huxley, Brave New World Revisited
Advertisement:

When a character is already so crazy that none of the traditional Go Mad from the Revelation-type phenomena or Brown Note will affect them in the slightest; they can speed read The King in Yellow and the Tome of Eldritch Lore, get into a Staring Contest with Cthulhu, contemplate the Void without any negative mental effects, and get caught in the Throat of Madness, simply because they can't get any crazier. This can also mean that they can wield/absorb any powers with these effects without any problems, either; powers that would drive a normal man insane simply won't affect them in any negative fashion.

They also cannot be controlled, predicted, or otherwise influenced by others: psychics will recoil in horror from the rotting offal that is their minds, those who can see the future will find their expectations dashed as destiny is royally screwed over, martial artists with Combat Clairvoyance will be no match for their Confusion Fu, etc.

This is a Disability Superpower, more specifically a Disability Immunity. See also Crazy Sane, Too Dumb to Fool, Too Kinky to Torture, Too Spicy for Yog-Sothoth, Too Broken to Break and Unfazed Everyman. Compare Infectious Insanity and Bored with Insanity.