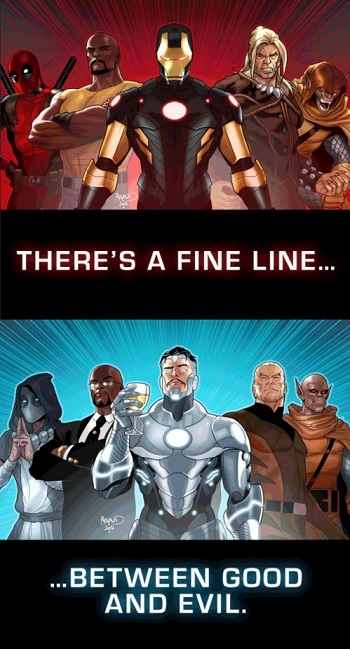 AXIS is a 2014-2015 Marvel Comics Crisis Crossover between Uncanny Avengers, All-New Captain America, Magneto, and Loki: Agent of Asgard, written by Rick Remender as a continuation of Avengers & X-Men. Following his assimilation of Charles Xavier's brain, the Red Skull has taken over Genosha and instituted "re-education" camps to bolster his Evil Counterpart to the X-Men, the S-Men. However, his meddling with Xavier's brain reawakens a force of evil once thought vanquished, and leads to many heroes and villains undergoing "Inversion". Magneto must come to terms with his moral ambiguity and whether he wants to fully reform into a hero or revert back to villainy in pursuit of his goals. Loki, having seen his twisted future, decides to fight fate for all it's worth, but clashes with Doctor Doom, who has also seen the trickster god's future self and decided to kill him in the present to avert it ever happening.