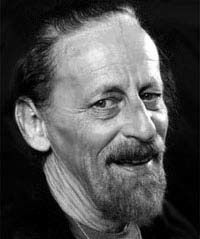 Theodore Sturgeon (born Edward Hamilton Waldo; February 26, 1918 – May 8, 1985) was an American writer of Speculative Fiction, often considered one of the best genre writers of his era (and some critics would omit the word "genre"). He never achieved much mainstream popularity, but he has been cited as a major influence by writers such as Ray Bradbury, Kurt Vonnegut and Harlan Ellison. He only wrote a handful of novels, of which More Than Human is probably the most famous, but several of his many short-stories are still popular, including "Killdozer!" (which inspired a film, a comic book, and a rock band)note  and falls under Write What You Know - yes, folks, Sturgeon once worked as bulldozer driver!, the much-imitated "Microcosmic God" (which has been referenced by The Simpsons, among others), and "If All Men Were Brothers, Would You Let One Marry Your Sister?"

Sturgeon wrote the screenplays for the Star Trek: The Original Series episodes "Shore Leave" and "Amok Time", and is credited with inventing the concept of "Pon Farr". He has also been cited as the inventor of that show's Prime Directive. In addition to Star Trek, Sturgeon wrote an episode of Land of the Lost, and two of his short stories were adapted for The Twilight Zone (1985). He also wrote some novelizations of popular movies, including Voyage to the Bottom of the Sea (a film which inspired a later TV series).

He has been mentioned as an inspiration for Kurt Vonnegut's recurring character, "Killgore Trout".

Today, however, he is probably best remembered for coining the aphorism known as Sturgeon's Law.

He was given a lifetime-achievement World Fantasy Award in 1985. The Theodore Sturgeon Memorial Award for best science fiction short-story of the year was created in his honor.