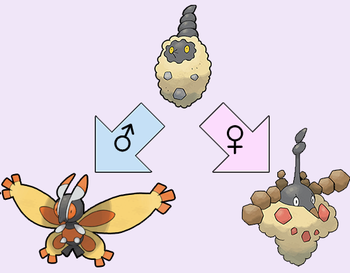 Fun fact: That's Truth in Television.
Jen: Wings? I don't have wings!
Kira: Of course not. You're a boy.
— The Dark Crystal
Advertisement:

As explained elsewhere, we primates have certain visual cues we rely on to tell a woman from a man; men are generally taller and more muscular. Women are shorter, have wider hips, and have larger breasts. This is because we are sexually dimorphic animals. Sexual dimorphism refers to the differences between the sexes other than their sex organs.

This is also the case in several other animal species, particularly those who also rely mostly on vision, and communicate largely with visual displays. The most common kind of dimorphism is when males and females of the same species sport different colors and markings.

Then there are a few species in which males and females look (relatively speaking) wildly different. One sex may have an entire anatomical feature that the other lacks (other than, you know, the obvious ones). Think the antlers in deer, for example. In a very few species, males and females may be even different enough to look like completely different animals, such as the anglerfish (wherein the males and females actually were thought to be separate species for a good time). Really, by the standards of the animal kingdom, human sexual dimorphism is very slight — the range of characteristics between males and females in the human species has substantial overlap.

And science fiction writers, when inventing aliens and fantasy races, love to run with this. There are several alien or fantastical creatures in which the sexes are wildly different. This tends to run towards the extreme end of the Earth scale and beyond: they could be greatly unequal in strength or intelligence; one sex could even be reduced to an inert breeding machine or parasite like certain species of insects and fish.

Sexy Dimorphism is a specific subtrope where if the species is humanoid, the female of the species will be more attractive by human standards than the male version.

Taken to the logical extreme, this leads to Hot Skitty-on-Wailord Action.

May occur in conjunction with Bizarre Alien Sexes, and in some such cases, "Bizarre Sexual Polymorphism" may be a more technically accurate term.* Indeed, that name redirects to this page.