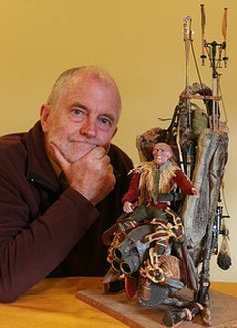 If you're into paleontology and speculative biology, this name must already be familiar to you. Born in Dumfries, 1947, he has written several books about dinosaurs, several of them for children, and you might have seen some of those already in the shelves of your library. He is, however, also well known for his books on speculative biology (in other words, imagining how life would evolve in other scenarios), being indeed among the first to write on speculative evolution.

In general terms, he tends to have several flaws on his books about biology, be them about dinosaurs or nonexistent species, but usually said flaws are washed away by his creativity and by the images the authors he hired do. Usually.

Notable Works by DD include:

Notable Tropes in his works include: