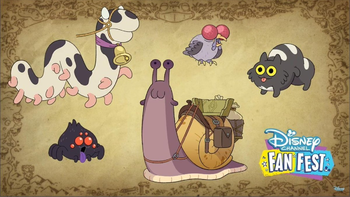 Frog Men have pets and livestock too.
Sam: Look at the mangos!
Flint: You mean flamingos!
Sam: Flamangos!
Brent: There's a bunch of shrimp!
Manny: They look like chimpanzees.
Together: Shrimpanzees!
— Cloudy with a Chance of Meatballs 2
Advertisement:

When it comes to Worldbuilding, writers often want to populate their world with a fantastic fauna different from our own. However, at the same time they want this fauna to be somewhat believable and/or familiar to the viewers. One way to achieve this is to make some of the fantasy species the exact counterparts of a real-world animal. Thus, we end up with things like giant insects flocking like pigeons, giant reptiles hunting in packs and howling like wolves, or tentacled creatures swinging from trees like monkeys. In a sense, each species acts like an Expy or a Suspiciously Similar Substitute of a different species.

The trope has two main variants. In one version, a number of fantasy/alien/prehistoric species are presented as counterparts to mundane, modern species. In the other version, the animals are mundane species, but clearly fill the role of other, more familiar species — for example, an underwater setting where fish and other sea creatures act like mammals and birds, a Mouse World where insects and other invertebrates are counterparts to larger animals, or a World of Mammals where there are other classes of animals replacing non-sapient mammals. A World of Funny Animals setting can use this trope to avoid Furry Confusion — if certain species are anthropomorphised, their original niche is filled in by a different species.

To qualify for this trope, it is not a requirement for every species in the setting to have a real-world counterpart. For example, the setting can have giant monsters or magical beasts which, naturally, don't have any real-life equivalent. Regular, mundane animals can also appear in the setting (even if they might have different names). As long as there is at least one species that plays the role of an obviously different real-life species, it counts — but of course, the more such species there are, the better. If the only fantastic species like this is the counterpart to a dog or a horse, add the example to the respective subtropes instead.

This phenomenon, to an extent, exists in Real Life and is called convergent evolution. It's a well-recorded phenomenon that in different parts of the world and/or in different time periods, species largely unrelated to each other but filling the same ecological role (niche) will evolve similar anatomical and behavioral traits, in response to similar pressures. However, these similarities will usually be superficial. But fiction likes to exaggerate this, with the fantastic species acting virtually identical to their real-world counterpart. They might even have surprisingly mundane names.

Common in fantasy and science fiction as well as in Speculative Biology. Specific variants include All Animals Are Dogs, All Flyers Are Birds, Horse of a Different Color, Seahorse Steed, Prehistoric Animal Analogue and T. Rexpy. When these are counterparts to livestock specifically, this will likely overlap with Fantastic Livestock; when they're vermin, it will instead overlap with Fantastic Vermin. If the animals are even named after their real-world counterparts, that's Call a Smeerp a "Rabbit". Compare Animalistic Abomination, where an Eldritch Abomination shows resemblance to a mundane animal; Call a Rabbit a "Smeerp", where the fantastic species is identical to the mundane species apart from its name and small cosmetic differences; and Informed Species, when an animal is intended to be a mundane species but doesn't look much like it. More often than not, these will be Mix-and-Match Critters. Might be subject to Binomium ridiculus if the writer wants to be scientific about it. Also compare Fantasy Counterpart Culture and Fantasy Counterpart Religion, where fictional cultures and religions replace real-life ones in a similar manner.