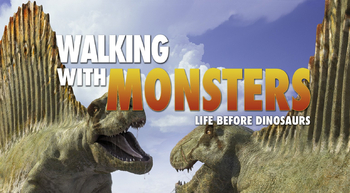 Walking with Monsters is the 2005 prequel to the Walking with Dinosaurs series, and is similarly narrated by Kenneth Branagh. Focusing on life during the Paleozoic era, Monsters showcases the evolution of numerous forms of life and their battle for dominance over the planet. Unlike its predecessors, Walking with Monsters covers multiple time periods within a single episode.