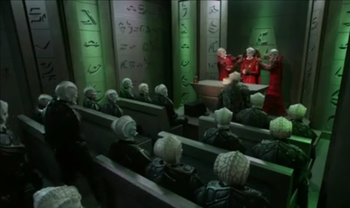 Some writers created fictional religions for their settings. Religious subjects in fiction are a sensitive issue. Targeting certain religious groups, and how it's done, may cause Unfortunate Implications or have the work Banned in China, or induce an Audience-Alienating Premise. The creator(s) often will wish to comment on real world religion without directly commenting upon on them.

They have various ways to get around this:

This trope is for in-universe
Advertisement:
mainstream religions. For religions that are considered cults in-universe there's already Cult. Settings After the End where trivial things from our culture are misidentified as sacred fall under All Hail the Great God Mickey!. For specific counterparts to the Church of Scientology, check Church of Happyology.

A Sub-Trope of Fantasy Counterpart Culture. May be involved in a Fantasy Conflict Counterpart. Compare with Fictional Political Party for the political version. Super-Trope to Crystal Dragon Jesus (in which the religion is more or less a substitute for Christianity), Fantasy Pantheon (for a made-up polytheistic religion), Interfaith Smoothie (a fictional religion influenced by two or more from the real world).