Western Animation / Cloudy with a Chance of Meatballs 2 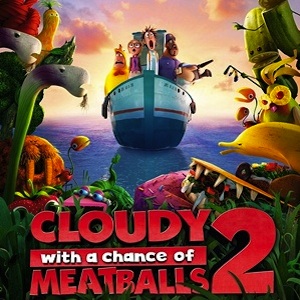 Something Has Survived.
Advertisement:

After a quick recap of the original movie the story picks up about ten minutes after the end of the previous installment. Flint stopped the food machine at the end of the first film and saved the world from the food storm, his idol Chester V shows up to offer free clean up of the island, and Flint a job at the Live Corp Company while relocating the rest of the Swallow Falls residents for their safety. When an unknown difficulty stops Chester's plans for the island, he convinces Flint to return and destroy the FLDSMDFR. Flint's friends and family come along, and soon discover the island has changed in their absence...

Its character sheet is shared with the first movie and can be viewed here.

Cloudy with a Chance of Meatballs 2 provides examples of: