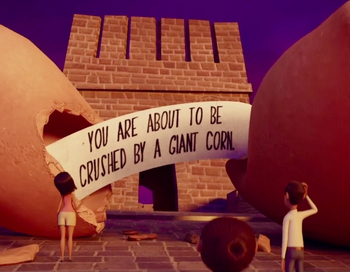 Three guesses to what happens next.
"Now, you may find it inconceivable or at the very least a bit unlikely that the relative position
Of the planets and the stars could have a special deep significance or meaning that exclusively applies to only you
But let me give you my assurance that these forecasts and predictions are all based on solid, scientific, documented evidence
So you would have to be some kind of moron not to realize that every single one of them is absolutely true!"
"Weird Al" Yankovic, "Your Horoscope For Today"
Advertisement:

This week, all Aquariuses will turn into mermaids, Taurus will hear some funny stories about a guy named Jimmy, and Leos will be eaten by gigantic land shrimp.

Usually, horoscopes employing Western Zodiac are about as broad as possible, so that anyone can feel like it applies to them. It follows from the so-called Barnum Effect/Forer Effect. It happens that individual people consider descriptions of their personality that supposedly are tailored specifically to them as highly accurate even though the descriptions are in fact very vague and general enough to apply to a wide range of people.

In fiction, however, it's often more entertaining to have horoscopes that describe something totally insane, either to prove how accurate the horoscope is or just to keep people on their toes. Sometimes the crazy, specific or crazily specific horoscope is left unexplained in-universe. Often, however, it gets revealed that somebody is messing with their friends and acquaintances on purpose because it's fun.

It's sometimes seen with other kinds of fortune-telling, such as fortune cookies. One variation is for the horoscope to be fairly specific, but still open to multiple interpretations so that the prediction can come true in an unexpected way.

It may overlap with Horrorscope or Misfortune Cookie. See also Suspiciously Specific Sermon.