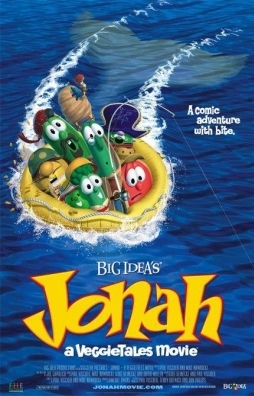 "Go in, give the message, get out."
—Jonah to himself as he enters Nineveh.
Advertisement:

The first full-length VeggieTales film, Jonah: A VeggieTales Movie was released in 2002 by Big Idea and FHE Pictures note  Artisan Entertainment under a different name .

The film opens with Bob, Junior, Dad Asparagus, Annie, Laura, and Percy all trying to find their way to a Twippo concert. However, they take a wrong turn, lose two tires on their van, and end up at a strange seafood restaurant, where they meet a trio of pirates who call themselves "The pirates who don't do anything!" The trio of pirates, noticing the tensions among the group, decide to tell them a little story about a man named Jonah.

As in the story in The Bible, the story of Jonah goes thusly: Jonah was a prophet of God, sent to spread His messages. However, when God tells Jonah to go to the Ninevites to warn them to repent of their evil ways, Jonah doesn't want anything to do with them...so he decides to go as far in the other direction as possible.

The movie's success lead to a second VeggieTales movie in 2008 called The Pirates Who Don't Do Anything: A VeggieTales Movie.

Jonah was a prophet! (Ooh-ooh) But he never really troped it.