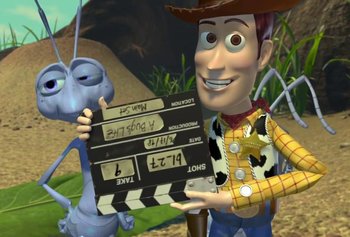 Lights, Camera, Animate!
Lots of live-action TV shows and films produce outtakes, as do audio works, live performances, and all kinds of other media where physical, existing things, are involved.
Advertisement:

Of course, the animated world isn't real. Ergo, the only things that exist in it are what was intended to exist, Off-Model notwithstanding: Given the difficulty in well animating lengthy projects, this is normally only what is necessary (and sometimes not even that).

Then you get some people who will do anything if it's fun. They make Animated Outtakes. Hilarity Ensues.