Western Animation / The Pirates Who Don't Do Anything: A VeggieTales Movie 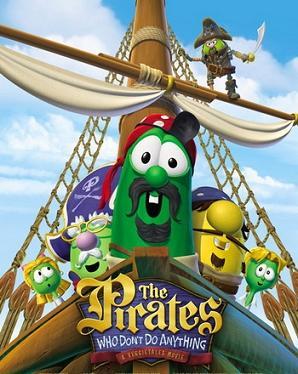 We are the Pirates Who Don't Do Anything
We just stay at home and lie around
And if you ask us to do anything
We'll just tell you, "We don't do anything"
Advertisement:

The film follows George, Elliot and Sedgewick (Pa Grape, Larry the Cucumber, and Mr. Lunt, respectively), three layabout waiters who work at a pirate-themed dinner theater. After they accidentally destroy part of the restaurant and get fired, they come across a strange golden ball...which teleports the three back in time to the 17th century.

They meet a princess named Eloise and her butler, Willory, and find the ball, actually called a Help-Seeker, was sent by Eloise in search of help after her older brother was kidnapped during an attack on their ship. She intends to rescue her brother but there isn't much she and her butler can do on their own, and as her father is away she has no way of asking for his help, which is why she sent out the Help-Seeker. She is under the impression that George, Elliot, and Sedgewick are the heroes she sent for. Her butler doesn't really think so though, and more importantly, neither do George, Elliot, and Sedgewick.

The Pirates Who Don't Do Anything provides examples of:

Alternative Title(s): The Pirates Who Dont Do Anything