Anime / Josee, The Tiger, and The Fish 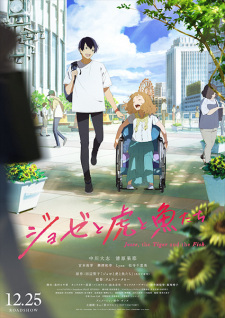 Josee, The Tiger, and The Fish (ジョゼと虎と魚たち; Josee to Tora to Sakana-tachi) is a romantic comedy anime movie by Studio Bones released in December 2020. The story follows Tsuneo Suzukawa, an college student who likes diving and aspires to study abroad in Mexico. One day, he meets and saves Josee, a disabled girl who is rarely allowed to go outside by her grandmother. The grandmother hires Tsuneo, who's a little tight on cash, as a caretaker for Josee. Josee (whose real name is Kumiko) makes odd requests, which, at first, aggravates Tsuneo. However, after seeing her room filled with drawings of sea creatures in the sky over cities, Tsuneo resolves to help Josee fulfill her wish to taste the sea.