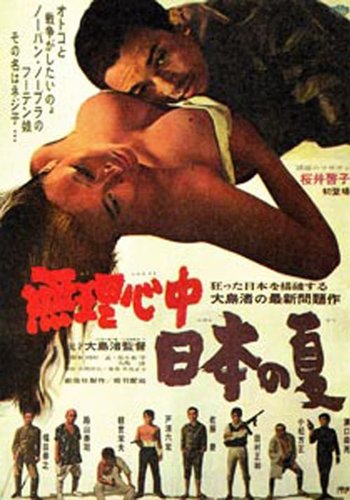 Japanese Summer: Double Suicide is a 1967 film by Nagisa Oshima.

An 18-year-old nymphomaniac girl named Nejiko is wandering around a city, presumably Tokyo, looking for a man to have sex with. Any man, really. She gets excited when a troop of soldiers pass by, but they march away. Right after that, however, she meets a deserter from the army named Otoko. Nejiko appeals to Otoko to screw her, but his thoughts are elsewhere. He wants to die, but rather than kill himself, he wants someone else to kill him so he can see himself in his killer's eyes.

It's that kind of movie.

Nejiko and Otoko somehow make their way to what looks like a dried-out riverbed. Nejiko has taken off her pants and is unsuccessfully appealing to Otoko to bang her when a group of gangsters arrives. They dig up a cache of weapons hidden in the riverbed. Then, apparently because Nejiko and Otoko have seen too much, the gangsters take them to a hidden lair. In the basement lair, the yakuza have assembled a bunch of cutthroats, who are waiting to fight another, rival group of gangsters. The combatants waiting in the underground lair include a fat guy in a loincloth who loves stabbing people, an older fellow with a gun who gets all philosophical about death, and other weirdos. This odd mix gets odder when the group is joined by a fresh-faced young man in a school vest who enters the compound to get a gun, because he really, really wants to kill people. Oh, and outside the compound, there are reports of a foreigner with a sniper rifle who is roaming around murdering strangers at random.