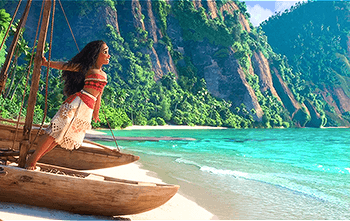 ♫"See the line where the sky meets the sea? It calls me!"♫
Advertisement:

This is the tendency for people to long to see the ocean in person, and admire it when they do, especially for the first time. Something about its vastness and majesty causes people to be inspired by it.

This trope doesn't actually have to apply to an ocean; any large body of water, such as a sea or large lake, will do. A good rule of thumb might be water extending to the horizon.