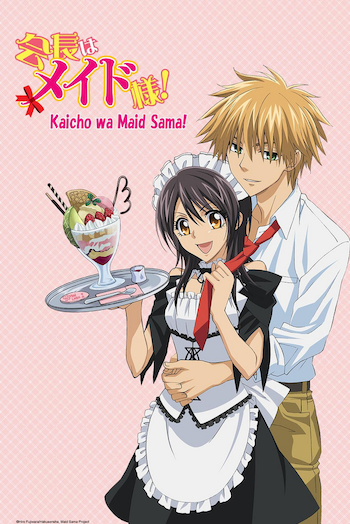 No, they're not a couple... They're a superhuman tag team...
Advertisement:

Misaki Ayuzawa is the first female Student Council President of Seika High School, a former all-boys school which, despite recently having turned coed, remains a den of masculine crudeness — stinking sports equipment, litter, sloppy hygiene, and racy magazines... not exactly a welcoming atmosphere for its nascent female student body. Misaki is determined to change all that, and, having won the presidency through a shockingly slim margin, she proceeds to rule (read: terrorize) the male majority with an iron fist.

Takumi Usui is the most popular boy in Seika High and, like Misaki, is a model student to boot — intelligent, strong, and popular with boys and girls alike — but he frustrates Misaki to no end by making any girl who comes to confess to him cry with his flat rejections. Misaki can't stand such men, let alone all men in general ever since her father walked out on her, her younger sister, and their mother with a huge debt to boot.

Misaki and Takumi's lives, however, would truly cross for the first time the moment the latter discovers Misaki's best-kept secret: she works part-time in a maid costume at the "Maid Latte" Maid Cafe in order to support her family. Despite this discovery, which Misaki fears will dash any respect left for her at school, Takumi does nothing... except become a frequent customer at the café, much to Misaki's confusion and chagrin. Is he planning to blackmail her? Is he just a jerk? Or, did the unthinkable happen — he fell in love with her?

Whatever the cause, hijinks will ensue.

Kaichou wa Maid-sama! ("The Student Council President is a Maid!") — Maid-Sama! for the US release — is a Shoujo Manga written by Hiro Fujiwara, which ran in LaLa from 2005 to 2013. An anime adaptation first aired in the Spring 2010 anime season, and is now available in the US by Section 23 Films. What's more, an OVA titled Kaichou wa Maid-sama! LaLa Special was released with an issue of LaLa. It features character introductions and a voice swapping comedy. The last DVD/BD of the anime also contained a short OVA featuring an extra story.