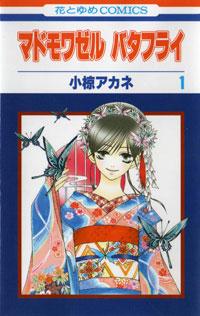 Mademoiselle Butterfly is a Historical Fiction Shoujo by Akane Ogura. Originally conceived as a one-shot, it was later turned into a full manga series, serialized in LaLa DX magazine from 2001 to 2006 and compiled into two volumes. It is based on the opera Madame Butterfly.

Butterfly is a young geisha in training in Japan. She loves and admires her childhood friend, Chinatsu. He's a tattoo artist, and he paints butterflies on her arms and is kind to her. One day she visits Chinatsu and finds a naked woman there. Butterfly is devastated at the thought of her friend with another girl all along. Soon after, a rich foreigner offers to buy Butterfly and take her to live luxuriously in a different land with him. She'll miss life at home, but maybe it will help her forget Chinatsu. But does he really want her?

Tropes used by the manga: