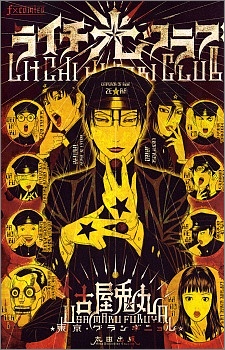 "With the birth of the machine, are we walking the path to our destruction?"
Advertisement:

Lychee Light Club (Litchi Hikari Club) is a Manga adaptation of the Tokyo Grand Guignol production of the same name, detailing the story of a vaguely fascist-tinted club of nine middle school age boys in their endeavor to create life for their own purposes. Cobbled together of a mixture of human and robotic parts, the elegant machine Litchi is sent by the boys to procure a girl their own age for as of yet unknown reasons. A new theatrical play is in production based off the manga, and Usumaru Furuya announced a continuation series on his website that would reveal more about the cast.

The original manga is available in English from Vertical Inc.

Not to be confused with Litchi Faye-Ling.