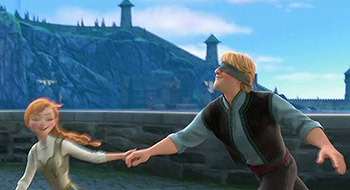 "Who wants to put on some blindfolds and get into my car?"
— Grunkle Stan, Gravity Falls
Advertisement:

A point in a story where a character is blindfolded and taken somewhere.

A blindfold is not even necessary. Being shoved and driven somewhere in a locked car trunk is pretty much blindfolded, for all intents and purposes - so long as the protagonist doesn't know where they are being taken.

Sometimes used in initiation ceremonies, trust-building exercises, or to hide the location of where a prisoner is being taken. Sometimes a character will sit down and try to figure out where they were taken by other senses than their vision.