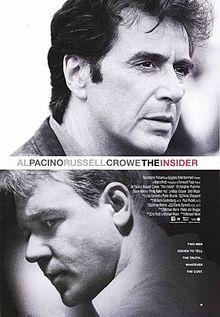 The Insider is a 1999 film from Touchstone Pictures, directed by Michael Mann and starring Russell Crowe, Al Pacino and Christopher Plummer.

It tells the true story of Jeffrey Wigand (Crowe), a senior researcher at Brown & Williamson tobacco company. After Wigand is fired from B&W, he goes to 60 Minutes and producer Lowell Bergman (Pacino) to spill the secrets he knows about the tobacco industry. Wigand's and Bergman's attempts to reveal the truth about Big Tobacco unsurprisingly lead to resistance from B&W – and, surprisingly, from their own network.

The All-Star Cast has a raft of recognizable actors in supporting roles, like Gina Gershon as a weaselly network executive, Michael Gambon faking a Southern accent (most of the time) as a weaselly tobacco executive, and Bruce McGill with a pretty spectacular One-Scene Wonder appearance as a lawyer who calls Wigand to testify in a lawsuit.

Nominated for seven Oscars, but didn't win any.

WIPE THAT TROPE OFF YOUR FACE!: