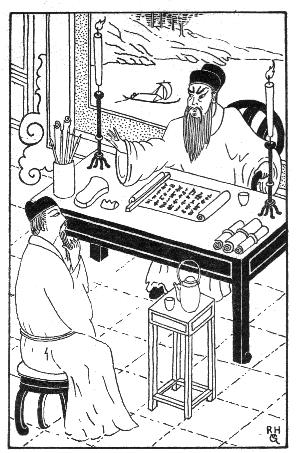 Judge Dee at work.
A judge must be as father and mother to the people,
Cherishing the good and loyal, helping the sick and old.
Though meting out stern punishment to every criminal,
Prevention, not correction, should be his primary aim.
A judge must brave the foaming billows of hate, deceit and doubt,
The only bridge across is straight and narrow as a rapier's edge.
He may not lose his foothold once, once pause to listen to his heart,
Heed Justice only, lodestar unfailing, though always remote and cold.
Advertisement:

Judge Dee is a series of Police Procedural novels and short stories set in Imperial China and written by the Dutch diplomat and sinologist Robert van Gulik. The series was Inspired by… the 18th century Chinese novel 狄公案 (dí gōng àn) or Cases Of Judge Dee, which van Gulik had translated during his war service, and had published in 1949 as Celebrated Cases Of Judge Dee.

It is the 7th century AD, and Tang dynasty China is the greatest power in Asia, if not the world. Peace and good order are maintained throughout the empire by a large, efficient bureaucracy of highly-educated gentleman-scholars. Dee Jen-Djieh begins his career as a District Magistrate, the lowest rung of the provincial government. Over the years, he confronts and solves mysteries ranging from conspiracies against the throne to domestic disputes, with the help of his small staff of assistants:

The Judge's private life is a peaceful haven from his stressful public duties, shared with his three wives:

The four of them get along famously and while away their evenings with endless, hard-fought games of dominos. Dee's wives are minor characters in Van Gulik's novels and short stories, but the "sequel" novels by Frédéric Lenormand (see the Fan Fiction section below) change this by having his wives appear far more often, to the point of the First Lady being a main character.

The Judge himself is an unusually tall, powerfully built man with a long black beard, piercing eyes and considerable presence. Men, especially wrongdoers, find him intimidating, but women, sensing the sensitivity and empathy under the formidable surface, tend to trust and confide in him. Particularly attractive young women in trouble.

Judge Dee believes in the spirit of justice, rather than the letter of the law. His aim is not just to punish the wrongdoer but to reward those who do right, and ameliorate the sufferings of the victims as far as is possible. He often goes out of his way to help somebody only tangentially connected with his cases.

There was a TV adaptation of The Haunted Monastery in 1974, as well as three movies note featuring the Historical Domain Character but not based on the novels in 2010, 2013, and 2018.