Film / Murder at the Baskervilles 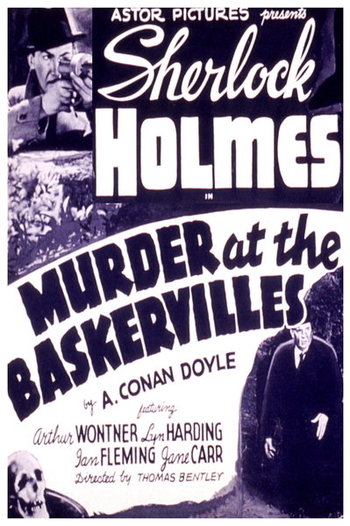 Murder at the Baskervilles (a.k.a. Silver Blaze) is a 1937 British, black-and-white crime and mystery film, based loosely on Arthur Conan Doyle's short story "Silver Blaze". It was directed by Thomas Bentley, and was produced by Twickenham Film Studios Productions. It stars Arthur Wontner as Sherlock Holmes, and Ian Fleming (no, not that one despite what some sources say) as Dr. Watson.

Sherlock Holmes takes a vacation and visits his old friend Sir Henry Baskerville. His vacation ends when he suddenly finds himself in the middle of a double-murder mystery. Now he's got to find Professor Moriarty and the horse Silver Blaze before the great cup final horse race.

Murder at the Baskervilles contains examples of: