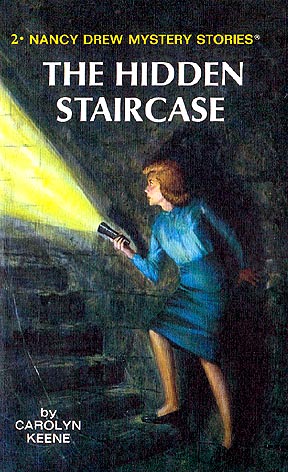 This page is for the book series. If you are looking for other Nancy Drew works, go here.

A young but brilliant teenage girl solves mysteries with the help of her two best friends and her understanding father. She also has a boyfriend. There are relatively few actual murders: it's more thefts, hauntings, kidnappings, and that sort of thing...

The original series lasted 34 volumes from 1930-1956, but continued from 1957-1979 with volumes 35-56 (and revised versions of the first 34 books). In 1979, the series switched publishers from Grosset & Dunlap to Simon & Schuster, and finally ended with volume 175 in 2003. It was rebooted in 2004 (under the title Girl Detective), featuring more modern sensibilities, and written in first-person. It ended in 2012 after 47 volumes, and 2013 saw a new series launch with the name Nancy Drew Diaries. There have also been many spin-offs.

Originally made by the Stratemeyer Syndicate, and as such, written by a great many ghostwriters. The idea was conceived by Edward Stratemeyer, who also laid down the plot outlines, but most of the distinctive characteristics are due to the writer of the earliest volumes, Mildred Wirt Benson. Harriet Stratemeyer Adams, daughter of Edward, took over control of the Syndicate upon his death in 1930. Adams is primarily credited with keeping the Syndicate afloat through the Great Depression, and with revising the two most popular series, Nancy Drew and the Hardy Boys, in the 1950s and 1960s, removing stereotypes and outdated ideas and language. She is credited with several books in the Nancy Drew series.

For what's basically the equivalent with dudes, see The Hardy Boys.

Tropes in the books include: