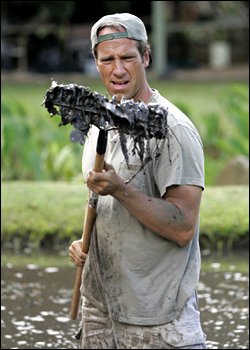 This is one of the cleaner jobs.
"My name is Mike Rowe... and this is my job. I explore the country looking for people who aren't afraid to get dirty. Hard-working men and women who earn an honest living doing the kinds of jobs that make civilized life possible for the rest of us. Now get ready... to get dirty!"
—The Opening Narration
Advertisement:

A Discovery Channel show in which host Mike Rowe visits a variety of job sites that are filthy, dangerous, weird, disgusting, or all of the above. He interviews workers, learns about the job, and tries his hand at performing each task. Cancelled in 2012 after eight seasons.

2013 had a brief continuation in Dirty Jobs Down Under where Mike Rowe and crew went to Australia to check out their dirty jobs, but it was also canceled.

In 2014, Mike began a new show called "Somebody's Gotta Do It" on CNN, with a similar premise, but it was cancelled in 2015, and was subsequently revived by TBN in 2018, also cancelled within the year.

2020 saw the return of the Dirty Jobs series with another continuation in Dirty Jobs Rowe'd Trip, which premiered on July 7.

The original Dirty Jobs series returned along with Rowe on January 2, 2022.