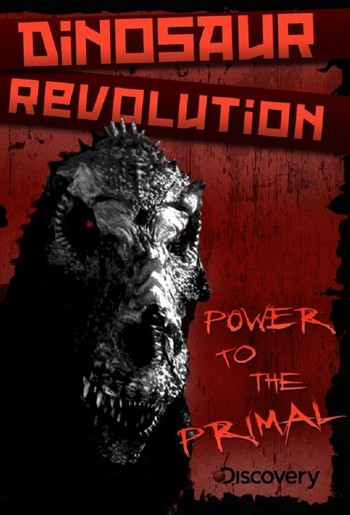 Dinosaur Revolution (released under its Working Title, Reign of the Dinosaurs, in Europe) is a major dinosaur-related Discovery Channel TV Documentary, which debuted on September 4, 2011.

Calling it a "documentary" may however be deceptive. It combines elements of various genres: traditional wildlife documentaries, silent movie-style "acting" and comic cartoon Slapstick, and presents them in the form of vignettes or longer, cohesive stories, focusing on the characterization and the relationships between the animals. One of the creative heads of the show was artist Ricardo Delgado, the man behind the Age of Reptiles series and the show was initially intended as a loose adaptation of that work. As always, whether this makes the show more entertaining or just plain dumb is up to the viewer to decide. However this isn't the first time that Discovery uses this borderline-Edutainment Show format for its dino-shows.

There has been a lot of buzz surrounding the production, due to the bold claims of its creators, which can be read here

. Basically, what the show set out to avoid was making paleontologists cry, and to show off some CGI. Another major subject of discussion is the "sparse narration" the press releases promised. Do note, the slightly controversial dino-anthropomorphism is justified due to the fact that originally, the show was to be broadcast with no Narrator, but Executive Meddling changed that.

, re-cut to a format truer to the production's original intent, titled Dinotasia, was released in a select few UK theaters on May 4th, 2012. It received a brand new narration by Werner Herzog. The re-cut, sadly, wasn't exactly met with warm reception by critics

, who cited the uneven effects quality, loose storytelling structure, cartoony personification of the animals and the lack of real educational value as its main drawbacks, though some reviewers claimed they found its bizarreness amusing in a weird sort of way.