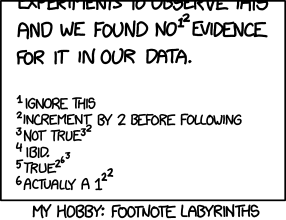 "Footnotes are the finer-suckered surfaces that allow tentacular paragraphs to hold fast to the wider reality of the library."
— Nicholson Baker, The Mezzanine
Advertisement:

Footnotes 1 First discovered in 1841 in the country of Asteriskia are a valuable literary device 2 They'd fetch half a million commas on the black market. and not just for scholars or high school students who need to pad out a report on the "Life and Death of Joan of Arc". 3 who was not Noah's wife No, authors of fiction use them too and often in various interesting and experimental ways. 4 Everyone experiments in college, right? These footnotes could contain jokes, 5 What did one footnote say to the other? "Follow me and we'll go places!" more information about what's going on in the story, 6 I am editing this page whilst being attacked by ninja mice. or even an entirely different story. 7 The ninja mice hail from a dwarf planet orbiting the star Zerkimirk. Their journey to Earth has brought them in conflict with many humans, and many of them now seek vengeance for the death of their leader, Spickaspeak. These authors have Footnote Fever! 8 Symptoms of Footnote Fever may include phantom hand syndrome, monkey lung, scrofula, late-onset albinism, pulmonary weevils and mild rash

Many translations will use footnotes because the main problem of translation (rather than simply transliteration) deals with how to get across elements that are specific to said work's original language or place of origin (puns, metaphors, hidden meanings, references, Values Dissonance, etc). Methods to prevent these elements from being Lost in Translation boil down to Woolseyisms or Translator's Notes (TN), footnotes where the translator explains elements that are too difficult to explain and keep the narrative flow uninterrupted. Obviously, translation into seriously unrelated languages tends to devolve into footnote fever quite quickly. See Too Long; Didn't Dub for more specific cases.

Examples of works utilizing footnotes only rarely applies in Non-Fiction Literature because citation is often done with footnotes, making it a standard feature of the medium.

For the Webcomic equivalent, see Alt Text. The Comic Book equivalent is Clue from Ed. Compare and contrast Colon Cancer.

open/close all folders
Anime & Manga
Comic Books
Fan Works
Literature
Live-Action TV
Music
Print Media
Radio
Tabletop Games
Video Games
Web Comics
Web Original
Western Animation
Real Life
9. In other words, his footnotes expand upon brief mentions of persons, places or institutions named in the text, for the enlightenment and edification of the reader.
10. Based on the Colbert Report segment "The Wørd", in which onscreen sidenotes are used to counterpoint Colbert's monologue.
11. This is the famous recursive footnote.11
12. It should be noted that Perl is a language which prides itself on compactness, and as a point of pride, many perl programmers will resort to barely-readable flurries of constructs in the name of, say, writing an entire web server in only three lines of code.
13. There is no reference to this footnote. How did you get here?14
This page incorporates CC-BY-SA material from the English Wikipedia article on Footnote.