Literature / The Curious Incident of the Dog in the Night-time 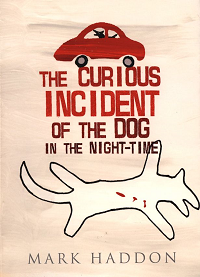 The Curious Incident of the Dog in the Night-Time (2003) is a novel by Mark Haddon. It is about young Christopher John Francis Boone, who knows all the countries of the world and their capital cities and all the prime numbers up to 7,507, but has almost no comprehension of human emotion.

One late night (exactly 7 minutes after midnight), he finds his neighbour's dog killed by a garden fork, leading him into an investigation that becomes about more than just a dead dog, but about the real world told through the eyes of a 15-year-old with severe autism, right down to the unnecessary details.

Adapted into a play which premiered in London in 2012 and debuted on Broadway in 2014. Similar to the book, which Christopher himself has written in-universe as a Mystery Writer Detective, he is also the author of his own play.

The Curious Incident of the Dog in the Night-Time contains examples of: