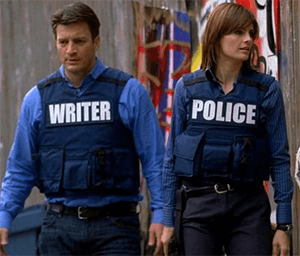 "There are two kinds of folks who sit around thinking about how to kill people: psychopaths and mystery writers. I'm the kind that pays better."
— Richard Castle, Castle
Advertisement:

Simply put, a mystery writer who solves actual crimes. After all, who better to unravel all the twists and turns of a mystery than someone who creates them for a living? Possibly a result of Write What You Know.