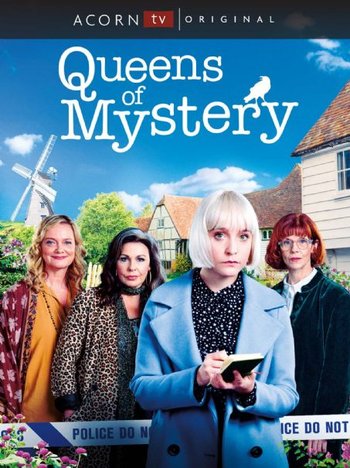 Queens of Mystery is a British comedy-drama-murder-mystery original series by Acorn TV.

Young Mathilda Stone "lost" her mother in mysterious circumstances at the tender age of three years, three days, three hours, and three minutes. Fortunately, her wildly eccentric aunts, Beth, Cat, and Jane, stepped in to raise her. As all three are successful crime writers (one even owning a mystery themed book store) it was "no surprise" Mathilda joined the police at eighteen. The series begins with Mathilda moving back to her hometown of Wildemarsh as a newly minted detective seeking to prove herself. Quirkiness, largely in the form of her dangerously (to others) affectionate and meddlesome aunts, ensues.

Queens of Mystery contains examples of: