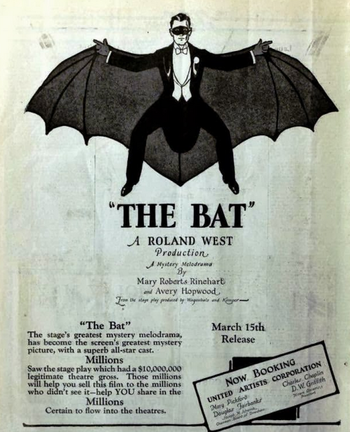 A freakin' Bat, but not the one you may be thinking of.
The Bat is a mystery play by Mary Roberts Rinehart and Avery Hopwood, based on Rinehart's earlier novel The Circular Staircase.
Advertisement:

The place is the country house of Courtleigh Fleming, the late President of the Union Bank. When his nephew Dick rented it to Cornelia Van Gorder, a spinster of 60, she expected her stay there to be a restful four months, enlivened by the occasional guest and some homemade elderberry wine. Instead, intruders and anonymous threatening letters left her hardly able to sleep at night, and newspaper stories about a mysterious nocturnal criminal known as "The Bat" only added to her worries. These disturbances were already too much for the weak nerves of Lizzie Allen, maid to Miss Van Gorder for twenty years, who would have packed up and left if Cornelia had allowed her. The cook, parlormaid, and housemaid had nothing stopping them from being frightened away from the house; each offered an unbelievable excuse for leaving. Besides Lizzie, the only servants left in the house were Billy, Courtleigh Fleming's Japanese butler, and Brooks, allegedly a new gardener but obviously no gardener at all.

Cornelia phones Police Headquarters, and a detective, Mr. Anderson, is sent over to the house. Arriving before the detective are Dale Ogden, Cornelia's pretty young niece paying an unanticipated visit, and Dr. Wells, the doctor who recently witnessed Courtleigh Fleming's death in Colorado and seems all too eager for Cornelia to leave the house with him. Cornelia, worried but determined to stay, orders the butler to let no more visitors in after Mr. Anderson, but more break-ins will happen later.

One unanticipated visitor is already in the house: Jack Bailey, alias Brooks, the cashier accused of the million-dollar theft which caused the Union Bank's recent failure. Secretly engaged to Dale, he tells her that it was Courtleigh Fleming, not him, who took the money out of the bank and stashed it in a Hidden Room built into the house. Dale gets the idea that Fleming's nephew would know where the blueprints are, and places a telephone call. Richard Fleming is driven over to the house in a hurry by a lawyer named Reginald Beresford. Dick finds the wanted blueprint, struggles over it with Dale, and is shot and killed. The shot came from the same staircase which Lizzie had earlier seen a ghost going up.

As the detective starts asking questions, a strange voice is heard groaning dreadfully over the house phone. The Calling Card of The Bat appears in the house, reminding Lizzie of Anderson's words in the paper: "He may be a merchant—a lawyer—a doctor, honored in his community by day—and at night a bloodthirsty assassin." The doctor makes a suspicious grab for the scrap of blueprint found in Richard Fleming's hand. Cornelia decides to do some detective work of her own, concerning the staircase. And an unknown man staggers in, not knowing who beat him and tied him up or even his own name.

The play was first produced in 1920, and became an international hit. It spawned a Novelization, and was adapted to film in 1926, 1930 and 1959. The 1930 film adaptation, titled The Bat Whispers, was cited by Bob Kane as one of the inspirations that led him to create Batman.

Not to be confused with Die Fledermaus.