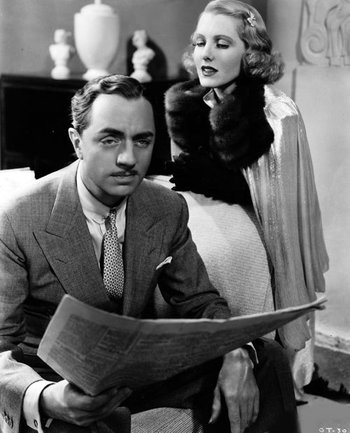 He just can't get rid of her!
Advertisement:

The Ex-Mrs. Bradford (1936) is a Romantic Comedy/mystery film, mimicking the success of the Thin Man series. It stars William Powell and Jean Arthur.

Dr. Lawrence “Brad” Bradford (Powell) divorced mystery author Paula (Arthur) for dragging him along on real life murder-mystery plots that put him in danger. But Paula has contrived a new way to get Brad back in her life; she blackmails on the basis of late alimony pay and forces him to help her investigate the suspicious death of a popular jockey.

It turns out that Paula was right. It was murder, and Brad's seriously involved since the police think he's the prime suspect. There’s a convoluted web of lies that Brad must get through to solve the mystery and fall back into the arms of Paula, much to his chagrin.