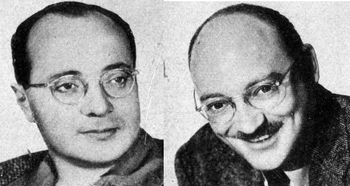 Manfred B. Lee (l) and Fredric Dannay (r)
Half-Way House, By Ellery Queen
I can recommend to the lover of the detective novel (which must not be confused with the mere adventure novel or those of international espionage, inevitably inhabited by sumptuous female spies that fall in love and secret documents) this last book of Ellery Queen. I can say that it meets the first requirements of the genre: statement of all the terms of the problem; economy of characters and resources; primacy of the how over the whom; a solution necessary and wonderful, but not supernatural. (In detective stories, hypnotism, telepathic hallucinations, elixirs of evil operation, witches and warlocks, real magic and recreational physics, are scams.) Ellery Queen plays with the supernatural, as does Chesterton, but in a lawful way: he suggests it to make the mystery bigger in the problem statement, then forgets or denies it in the solution.
Advertisement:
In the history of the detective genre (dating from April 1841, the date of the publication of "The Murders in the Rue Morgue" by Edgar Allan Poe), Ellery Queen novels import a deviation, or a little progress. I refer to his art. The novelist often proposes a vulgar clarification of the mystery, then dazzles his readers with an ingenious solution. Ellery Queen proposes, like all the others, a not so interesting explanation, suggests (at last) a very beautiful solution which the reader falls in love with, then refutes it and discovers a third solution, which is the correct one: always less strange than the second, but entirely unpredictable and satisfying. Other great novels of Ellery Queen: The Egyptian Cross Mystery, the Dutch Shoe Mystery, The Siamese Twin Mystery
—Jorge Luis Borges. Revista Hogar, October 30, 1936
Advertisement:

Golden age mystery writer, used as both a pen name for two authors, cousins Frederic Dannay and Manfred B. Lee (real names Daniel Nathan and Emanuel Benjamin Lepofsky), and as the eponymous character.

For the television series featuring the character, see Ellery Queen.

Books by (and/or) featuring Ellery Queen: