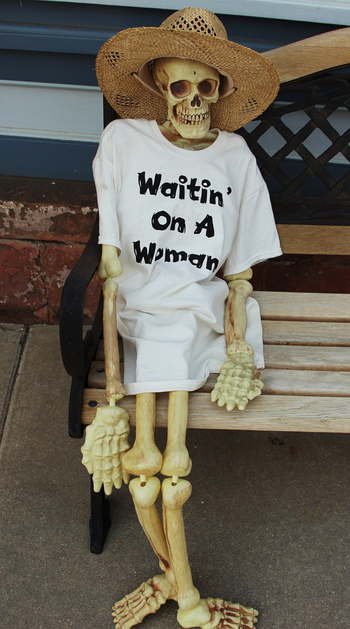 Let's give her five more minutes...
A common gag used to demonstrate waiting time in a place can be rather long. Common example: Bob arrives in a building (like a hospital or government building), and is told at the reception desk that he has to wait his turn. As he sits down in the waiting room, he notices a skeleton sitting in the chair next to him and realizes he might be here for a very long time.
Advertisement:

The same gag is also usable to demonstrate that a place is not visited very often, and/or that somebody has been trapped or locked in there till he died.

See Time-Passage Beard which is a related sight gag showing people who have been waiting for a long time with long—usually white—beards. (In fact, sometimes the two gags are combined so that the skeleton will also have a Time Passage Beard.)

Compare Dem Bones for when the skeleton in question is still alive.