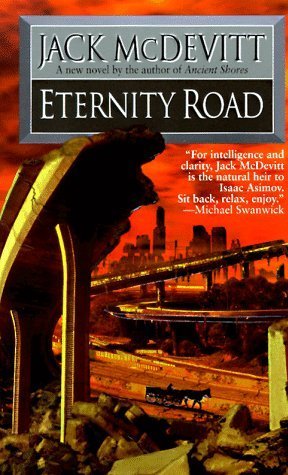 The Illyrians knew the world was round, though some among the lower classes were skeptical. They knew that infections were caused by tiny creatures they could not see, that the pattern of nights and days resulted from the movement of the world and not of the sun, that the Mississippi rose in a land of gigantic ruins and emptied into a gulf whose waters ran untroubled to the horizon.
Advertisement:

Eternity Road is a 1997 Sci-Fi novel by Jack McDevitt.

It's the far future, long After the End. The residents of Illyria live (in what was Memphis, Tennessee), among the ruins of the "Roadmakers", named thus because the most lasting remnants of that great civilization were their roads.

When one citizen leads an expedition to find the fabled "Haven", where all the lost books of the Roadmakers are stored, written about by the mythical Abraham Polk, he returns alone and empty handed, the rest of the party reportedly dead. Nine years later he commits suicide. Strangely enough he bequeaths an assumed lost Roadmaker book named A Connecticut Yankee in King Arthur's Court to the sister of one of the men lost on the trip. This leads some to think that maybe he had found Haven after all - but why didn't he tell anyone about it?

A second expedition is assembled to see what the truth is...