Recap / The Simpsons S4E14 "Brother from the Same Planet" 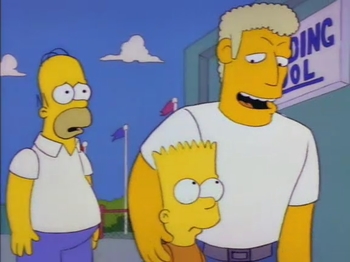 Angry over Homer neglecting to pick him up from soccer practice, Bart poses as a homeless child in dire need of a father figure for the Bigger Brothers Organization and begins spending time with a cool man named Tom. Meanwhile, Lisa tries to break her addiction to a 1-900 line where pretty boy celebrity, Corey, talks to girls.